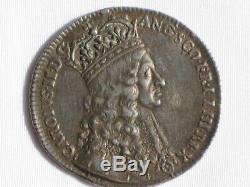 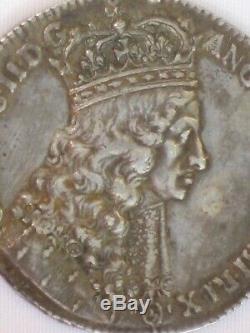 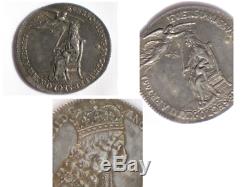 Finest English Silver & Collectable Antiquities. Preserving the past for the future. Nice Original Rare King Charles II, Coronation 1661, Official Solid Silver Medal, by Thomas Simon. As you can see from the photos, this is in Very good condition the portraits to both sides are good. Obv: Crowned bust of Charles II in ermine robes, collar and George of the Garter.

(Charles II, by the grace of God, King of England, Scotland, France and Ireland). Rev: and orb in hand. Peace hovering over the enthroned king and placing a crown on his head sceptre Legend: EVERSO. Sent to support a fallen age, 23 April, 1661. Based on Virgil Georgis 1.500.

MI I 472/76, plate XLV/7, Eimer 219, Fearon 112.1, Wollaston 5. Please see photos and study well, the more you look the more the detailing becomes apparent, I have put in numerous amounts of photos for this to be observed. It has a very nice toned appearance and has never been cleaned. These medals would have been given to the dignitary and attendee of the Coronation.

King Charles II, son of Charles I who was beheaded on the orders of Sir Oliver Cromwell, once Cromwell was dead Charles was crowned King of England. The medal is dated 1661, five years before the Great Fire of London and at time when the plague was rife throughout England and Europe. Out of all medals the Coronation Medals are probably in the top Twenty of collectable items and fast approaching 360 years old. A Great Investment For The Future.

1665, English medallist, was born, according to Vertue, in Yorkshire about 1623. He studied engraving under Nicholas Briot, and about 1635 received a post in connection with the Tower Royal Mint, London. In 1645 he was appointed by the parliament joint chief engraver along with Edward Wade, and, having executed the great seal of the Commonwealth and dies for the coinage, he was promoted to be chief engraver to the mint and seals. He produced several fine portrait medals of Cromwell one of which is copied from a miniature by Cooper After the Restoration he was appointed engraver of the king's seals. On the occasion of his contest with the brothers Roettier, who were employed by the mint in 1662, Simon produced his celebrated and most famous crown of Charles II.

On the margin of which he engraved a petition to the king. This is usually considered his masterpiece. He is believed to have died of the plague in London in 1665.

Very Good indeed wonderful detailing still present, some surface marks consistent with age and genuine use tiny solder repair bargain price for the detail. Maybe a gift for someone special, birthdays , christenings , all occasions, for your own collection maybe. The item "Nice Original Rare King Charles II, Coronation 1661, Official Solid Silver Medal" is in sale since Saturday, April 25, 2020. This item is in the category "Antiques\Silver\Solid Silver\Other Solid Silver". The seller is "uksilverantiques" and is located in london, London.

This item can be shipped worldwide.