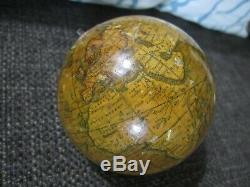 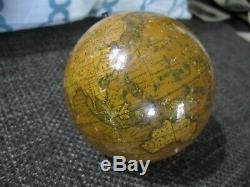 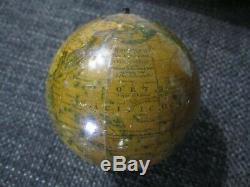 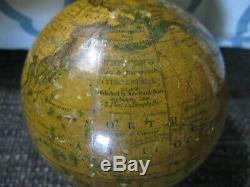 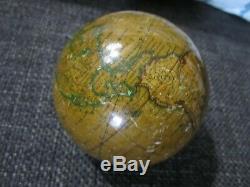 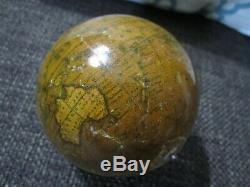 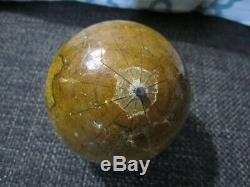 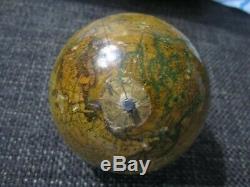 Condition is good, as noting lacking the original box, globe is un-restored with surface scuffs on the original varnish, some varnish losses, but underlying surface appears solid, more wear to varnish at site of the pins. Geographic entities are faintly colored in red, green and yellow with thick, boldly colored outlines. & Gore (Captains Charles Clerke and John Gore) who completed the third voyage after Cook's death.

California is shown as a peninsula. The Antarctic region is shown without cartography, except for three spots labeled either "Ice" or Isles of Ice. The location of the antipodes of London is marked. An identical globe in a mahogany box is in the collection of the National Maritime Museum in Britain and pictured in Dekker, Globes at Greenwich. They have dated it circa 1860, based on the reference in the cartouche to the Fleet Street location of Newton & Son, which opened in 1852.

Newton & Son was operated from 1841 to 1883 by descendants of the British globe maker John Newton, who started making globes in the late 18th Century. The Newton family of cartographers were among the leading English globe makers of the early 19th Century, producing floor standing, table, and pocket globes under various names. The firm's history dates back to Nathaniel Hill, who taught the art of globe making to Thomas Bateman fl.

John Newton began his firm in 1780, first publishing a reissue of a Nathaniel Hill pocket globe in partnership with William Palmer. From 1831 to 1841, Miles Berry, a civil engineer, was a member of the firm, known as Newton, Son & Berry. After 1841, ownership passed to William Newton's eldest son William Edward Newton (1818-79).

The heyday of the pocket globe was Georgian period England, from the early 18th century to about 1840, where they were mainly made as novelty items for English aristocrats interested in geography and astronomy. The item "Rare Newton's New & Improved Miniature Terrestrial Globe, c. 1860, Nice" is in sale since Saturday, March 30, 2019. This item is in the category "Antiques\Maps, Atlases & Globes\World & Celestial Globes".

The seller is "gkwfleming" and is located in Huntington, West Virginia. This item can be shipped to United States.